IN the last two decades, as working schedules became flexible, and even accounting firms, of all places, embraced the mantra of work-life balance (at least on paper), there was one unbending, tradition-bound profession: the law.

That is why it is so remarkable to watch the legal world racing — metaphorical black robes flapping — to catch up.

Over the last few years and, most strikingly, the last few months, law firms have been forced to rethink longstanding ways of doing business, if they are to remain fully competitive.

As chronicled by my colleague Alex Williams in the Sunday Styles section earlier this month, lawyers are overworked, depressed and leaving.

Less obvious, but potentially more dramatic, are the signs that their firms are finally becoming serious about slowing the stampede for the door. So far the change — which includes taking fresh looks at the billable hour, schedules and partnership tracks — is mostly at the smaller firms. But even some of the larger, more hidebound employers are taking notice.

Charge Against Ex-Boxer Dropped When Witness Shows Up Drunk

PORTLAND, Maine — A felony charge against a former women’s boxing champion from South Portland was dropped when the alleged victim showed up in court too drunk to testify.

The prosecutor said she was reluctantly dropping the elevated aggravated assault charge against Margie Dunson, who could have faced up to 20 years in prison. Instead, she will not have to do any additional jail time.

Dunson, 57, who held the world welterweight title in 1977 and 1978, was accused of stabbing John Jackson in the chest during an argument while they were drinking and watching the Super Bowl last year at Dunson’s home.

District Attorney Stephanie Anderson said Jackson appeared drunk when he arrived at the Cumberland County Courthouse, and a test revealed that his alcohol content was 0.12 percent, which is above the legal limit for driving.

Details here from the AP via WMTW.com.

A judge has ruled that the Santa Barbara News-Press committed flagrant violations of federal labor laws when it fired eight journalists for engaging in union activities, and he ordered that the newspaper rehire the former employees.

Kocol ruled in a case brought by the National Labor Relations Board, which accused the paper of retaliating against employees who planned to join a division of the Teamsters union.

“This decision really is all-encompassing; it’s everything we wanted it to be,” said Melinda Burns, who worked for the paper for 21 years before she was fired in October 2006.

Attorneys for the News-Press and its publisher, Wendy McCaw, said Monday that they were “extremely disappointed” with the ruling and that the paper “will exhaust all possible appeals and fully expects to achieve justice through that appellate process. The matter as a whole is in its infancy.” McCaw referred requests for an interview to her attorneys.

Nonetheless, some observers who have objected to McCaw’s handling of the newspaper she bought in 2000 were quick to applaud Kocol’s ruling.

“I don’t know whether there’s going to be an immediate practical effect, but the psychic impact of this and the symbolic impact is enormous,” said Lou Cannon, the longtime Washington political columnist and Reagan biographer who lives outside Santa Barbara.

“You had all of these people who were really fine journalists and they were just thrown out in the street for no reason.”

Happy New Year to unions and journalists everywhere! Details here from the Los Angeles Times. My earlier posts about this dispute are here and here. 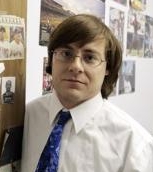 FRANKFORT, Ky. (AP) — One of the biggest capital punishment cases to come before the U.S. Supreme Court in a generation was put together largely by a young, fresh-out-of-law-school member of Kentucky’s overworked and underpaid corps of public defenders.

David Barron, 29, filed an appeal on behalf of two Kentucky death row inmates, arguing that the three-drug cocktail used in lethal injections across the country can cause excruciating pain, and thus amounts to cruel and unusual punishment in violation of the Eighth Amendment to the Constitution.

After three years of long hours on Barron’s part, the Supreme Court agreed to hear arguments in the case on Jan. 7.

“I can’t believe I’ve got a case before the Supreme Court and I’m not even 30 years old,” Barron said.

This is the first time in more than a century that the high court will address the legality of a method of execution. Thirty-six states use lethal injection, and executions across the U.S. have come to a halt in the meantime.

Barron, an assistant public defender, arrived in Kentucky in 2004, just over a year out of law school, to represent some of the worst of the worst — death row inmates. He was admitted to the Kentucky bar in July of that year, and filed his lethal-injection challenge the following September, employing a strategy he had tested out in other jurisdictions.

Details here from Brett Barrouquere of the Associated Press.

He used to be one of them. Now an attorney, he’s dedicated to helping drug addicts and skid row residents.

Legal aid lawyer Louis Rafti was leading a group of law students on a tour of skid row when he saw it in the corner of a homeless shelter.

The cot. The very one, he could swear it was, that he had slept on during his last night on the row a few years before.

Rafti froze. He didn’t say a word, but a sense of wonder overwhelmed him.

Wonder that he did not have a crack pipe in his hand. Or a needle in his arm. That he had a home, a job, a life.

These days, Rafti is a pugnacious housing rights lawyer for the Legal Aid Foundation of Los Angeles, known for his take-no-prisoners advocacy on behalf of the poor and disabled.

What many of his clients and colleagues don’t know is that until six years ago, Rafti was a homeless cocaine addict. He contracted HIV from dirty needles. He watched friends die. He would get cleaned up, only to relapse and return to the streets.

Now, at age 49, dressed in sensible shoes and a dark polo shirt, he is back on the streets of skid row — this time as a lawyer for the kind of person he once was.