Internet Quotation of the Week

I stole this awesome quotation from Donna Wentworth of COPYfight.org, a great blog straight outta Harvard Law School. Donna has done us a great service by blogging from (something called) ILAW. Thanks, Donna! 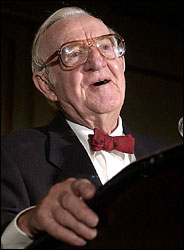 Staff - November 30, -0001
I try to avoid injecting much opinion or politics into this weblog, but I feel a civic duty here.

All politicians spin and selectively recite the facts that favor them — it’s the nature of the beast.

But I’m increasingly convinced that the Bush administration takes it a notch further, and just flat out lies. I’m convinced that they have repeatedly decided “let’s do plan A,” and then come out and told the press and public that “we’re doing plan B” when the two plans are diametrically opposed. That’s brazen. That’s unacceptable.

I’m increasingly convinced that the core of this administration has a radical “neo-con” agenda that they are systematically carrying out while knowingly lying about what they are doing because they know the American people would be outraged if they understood what the administration was really doing.

Donald Rumsfeld was recently (3/14/04) caught red-handed on CBS’s “Face The Nation” lying about earlier lies he had told about Iraq. Read all about it here.

And Congressman Henry A. Waxman has compiled a report and database of the lies that Bush, Cheney, Rumsfeld, Powell and Rice told to the American public and the world to get us to go to war in Iraq. It makes compelling reading and speaks for itself. You can see for yourself here.

I think the American people are beginning to wake up and notice all of this. I hope so. And I hope the mainstream, non-partisan press lends a hand.

Why are federal officials prosecuting people for importing lobster tails in plastic bags instead of cardboard boxes? Or because a small percentage of the lobsters in a particular shipment were less than 51/2 inches in possible violation of Honduran law? Law Prof Ellen Podgor and Heritage Senior Research Fellow Paul Rosenweig ask: Have we won the war on terror or the drug war? Why the waste of resources? Read their op-ed in today’s Washington Times, Bum Lobster Rap.

“Law Firm Is Sued Over Conduct in Liability Case”

A Texas law firm faked evidence and tried to bribe witnesses in a products liability case, according to a lawsuit filed on Monday in San Antonio by the DaimlerChrysler Corporation.

The lawsuit follows an appeals court decision last year that dismissed the products liability case and imposed sanctions of $865,000 against three of the firm’s lawyers. The appeals court called the firm’s conduct “an egregious example of the worst kind of abuse of the judicial system.”

The main plaintiff’s lawyer, Robert A. Kugle, has fled to Mexico, according to this article from The New York Times, which makes it pretty clear why the public disdains lawyers. (via Overlawyered.com)

Staff - November 30, -0001
Was that a deer or a human I hit? And was I transacting Firm business at the time? law.com reports on it here.
Read more...