A federal appeals court ruled Tuesday that rap artists should pay for every musical sample included in their work – even minor, unrecognizable snippets of music.

Lower courts had already ruled that artists must pay when they sample another artists’ work. But it has been legal to use musical snippets – a note here, a chord there – as long as it wasn’t identifiable.

The decision by a three-judge panel of the 6th Circuit Court of Appeals in Cincinnati gets rid of that distinction. The court said federal laws aimed at stopping piracy of recordings applies to digital sampling.

“If you cannot pirate the whole sound recording, can you ‘lift’ or ‘sample’ something less than the whole? Our answer to that question is in the negative,” the court said. “Get a license or do not sample. We do not see this as stifling creativity in any significant way.”

Others may disagree. Details here from the AP via All Headline News, or read the court’s opinion.

When a B-29 crashed in 1948, the Air Force fought to hide the details. Now, the families of those killed want to reopen the case that became precedent for official secrecy.

This fascinating story details attempts to reopen a 50-year old Supreme Court case that may have been influenced by a fraud on the Court. Details here from The Philadelphia Inquirer. (via How Appealing)

Diebold has delivered dozens of cease-and-desist notices to website publishers and ISPs demanding that they take down corporate documents revealing flaws in the company’s electronic voting systems as well as difficulties with certifying the systems for actual elections.

Apparently the ruling from the Northern District of California in San Francisco is expected by noon on Tuesday. Details here.

A Broken Body, a Broken Story, Pieced Together

Staff - November 30, -0001
Want to know what really happened to Private Jessica Lynch, the now-famous American POW “rescued” from an Iraqi hospital? Chances are, you never will. It’s not clear that anyone ever will.

But in this exhaustive investigative piece, The Washington Post suggests that her injuries were most likely sustained in a car crash during an ambush, and may not have resulted from deliberate abuse at the hands of Iraqi combatants. In fact, it seems that Iraqi civilians probably did their utmost to care for her under the circumstances, and almost certainly saved her life. And other parts of the story we’ve all been told appear to be dubious, if not outright fabrications.

The main thing I distilled from The Post‘s story is a sense of the utter confusion and chaos of combat. Particularly the sporadic and random combat that occurred throughout Iraq in the early days of the “war.” It’s a good report, and worth the read.

(UPDATE: Looks like TalkLeft beat me to the punch on dissecting (blawgsecting?) the WashPost’s article.)

Staff - November 30, -0001
“The Commission on Judicial Conduct has determined that Calvin M. Westcott, a town court judge in Hancock, Delaware County, should be removed for having sex with a mentally retarded woman entrusted to his care, the New York Law Journal reports” here.
Read more...

Anshe Chung, a real-estate tycoon in the digitally simulated world known as Second Life, has apparently become the first virtual millionaire–i.e., someone whose holdings in a make-believe world are legally convertible into genuine U.S. currency worth more than $1 million.

Chung is the nom de keyboard of Ailin Graef, a former schoolteacher who says she was born and raised in Hubei, China, and is now a citizen of Germany. She will give a press conference about her achievement tomorrow (November 28) at 9:00 a.m. PST, although it will occur in-world, i.e., to attend you will need to have downloaded Second Life’s software from the company that created and maintains it, Linden Lab. 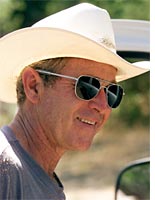 This entry’s title is from The Washington Post, quoting “a senior official involved in policy since the 2003 invasion [of Iraq].”

Let me give you the full quotation:

“We are in a process of absorbing the factors of the situation we’re in and shedding the unreality that dominated at the beginning.”

My translation: The neocons who dominate the Bush Administration are finally having to wake up and smell the coffee. They thought there would be no resistance and few casualties, that the Iraqi people would welcome our soldiers with flowers, that the war would be over in weeks, and that democracy and peace would spread throughout the Middle East like a virus. Turns out, they were wrong.

Sane people – and all the lessons of history – told them they were impossibly wrong from day one. They wouldn’t listen. They huffed and puffed and bragged and denied for more than three years, while over 1,800 Americans died, countless others were maimed and wounded, and hundreds of thousands of Iraqis were killed.

Now, while things continue to worsen, Bush takes a five-week vacation, while “a senior official involved in policy since the 2003 invasion” says: “We are in a process of absorbing the factors of the situation we’re in and shedding the unreality1 that dominated at the beginning.”

Second translation: “We were full of shit from day one. We’ve pretended we weren’t for three years, but now the jig is up. We are desperate and trying to figure out how the fuck to save face. Help!”

1 Wishful thinking, but does “shedding the unreality” include hanging Dick Cheney and Donald Rumsfeld by thier ankles from lamp posts? It should.

The professional sports industry has become entangled in an emerging web of intellectual property litigation over issues ranging from who owns player statistics in fantasy leagues to who possesses the view of a baseball park.

Legal experts say technology-specifically the Internet-is revolutionizing the way fans view and participate in sports while simultaneously creating a host of new legal headaches for the sports industry. In the last two years alone, more than a dozen copyright infringement and other IP-related suits have popped up in the sports world.

And the sports industry, attorneys note, is struggling to keep pace with technology, claiming that numerous copyright violations are occurring through new media they can’t control.

The leagues have complained about Fantasy sports websites using player statistics; “real time” webcasting of games; and even TiVo. And get this:

“Player statistics are in the public domain. We’ve never disputed that,” [Jim] Gallagher[, senior vice president, corporate communications for MLB Advance Media,] said. “But if you’re going to use statistics in a game for profit, you need a license from us to do that. We own those statistics when they’re used for commercial gain.”

Actually, no, Jim. It’s either in the public domain (for all purposes), or it ain’t. Details here from The National Law Journal.

I must admit, I admired Rummy early on. I never liked him — he’s an unapologetic asshole fanatic — but I admired him. He’s damn good at what he does.

Check out The Stakeholder for details.