We have all seen the memes and heard the jokes about individuals standing up revealing to all that they are not wearing pants during Zoom calls. Be forewarned, as hilarious and as silly as this may seem, it is not that hard to do. Thankfully, prior to participating with co-counsel, Mark Osherow in a non-jury trial via Zoom over six days, before the Circuit Civil Division in Miami-Dade County, we had several hearings to practice our Zoom (and pants wearing) skills. As I learned through trial and error, the camera feature on Zoom does not turn off when you are not speaking. It was only until after my third hearing that I discovered that I had to click the “Stop Video” feature in order for the camera to be turned off.

After making my arguments during a Special Set hearing, and upon commencement of opposing counsel’s argument, I stood up (revealing my pineapple-print shorts), took off my suit jacket, and let my dog jump in my lap where he remained for the rest of the hearing. It was only after the hearing that Mark advised me of my mistake, which he found so hilarious that he made a comment about needing his emotional support animal during the hearing, which no one seemed to notice. Graciously the Court and opposing counsel did not mention anything about my indiscretions; I will assume they were not viewing the hearing using the Gallery View function; I will certainly not make that same mistake twice. I highly recommend muting your microphone whenever you are not speaking, in addition to stopping the video.

Mark and I decided it would be best if we set up the conference room to mimic a courtroom. A few days prior to the commencement of trial we set up as well as tested all equipment (laptops, headsets, cameras, televisions, PC monitors, etc.) We also each logged in to Zoom and had a number of mock trial sessions to test out functionality and make sure everything was working properly. There are more things to be concerned about than you might think. We practiced the “share screen” function to practice presenting evidence to witnesses and asked each other questions as if we were witnesses. We also tested the lighting and backgrounds. Our set up is pictured in Diagram 1 and described as follows: 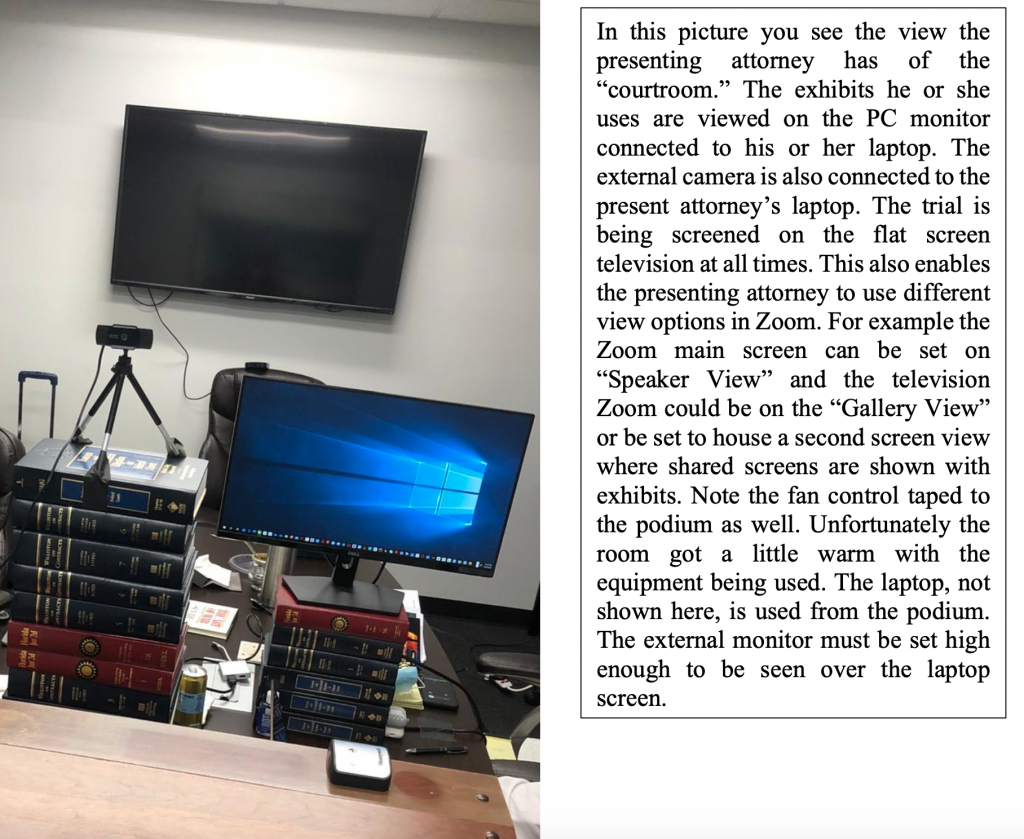 We both agreed that it would be best to have either a clean, professional, live neutral background (such as the painting in the conference room behind the presenting attorney’s podium) or a virtual solid color background as the background, when we sat in messy areas of the conference room during the trial. Lighting was also an issue that we had to deal with prior to trial. As you can see in my picture at the Ritz, there is a blue glare and a reflection of the laptop screen on my glasses; Mark wears quite stylish glasses during trial (not those pictured during his Dublin calls) that we needed to make sure also did not reflect the laptop screen. Although a problem when appearing from other locations, such as a home office, glare was not an issue during the Zoom trial located in the conference room; the overhead lights did not shine directly on our glasses, and neither of us was close enough to the screen during our presentations so that reflection would be an issue. This was also a benefit of the podium set up.

One particularly challenging yet very important aspect of a Zoom trial is being able to follow the Judicial Assistant (“JA”) and the Clerk’s instructions. If either of them says “Jump!” you ask, “How high?” The JA’s instructions need to be followed in order for the Clerk to be able to upload all of the exhibits to the software used by the Clerk and the Judge during trial. If the parties do not label the exhibits as instructed by the JA and the Clerk’s office, matching up the exhibits with the numbered list may be impeded. Note that the numbers assigned to each exhibit in the document name may not transfer over to the court’s system. Rather than printing exhibits, putting exhibit labels on them, then scanning them, we were able to find electronic exhibit tabs you “stick” onto the PDF exhibit. Prior to trial the Clerk spent time with each party reviewing exhibits that could not be clearly seen or identified on her software. There are good and quite inexpensive document exhibit stamps available to integrate with Adobe Pro DC. I suggest you obtain one and learn how to use it yourself or designate a staff member to handle this task (videos available). Contact us if you need additional information about this.

Finally, I cannot stress enough the importance of extension cords, duct tape, and AC adapter power cords for all electronic devices to be used. We each also had two (2) laptops with us throughout the trial in case one of them crashed…in addition to enough snacks to stop a train should any of the participants on our end require nourishment. I cannot say enough how important it is that you find and test a setup that works best for you.

Please come back on Monday, August 3, 2020 for a Q and A session with Kristin and Mark. Our thanks to them for allowing us to republish this article and the Q and A!